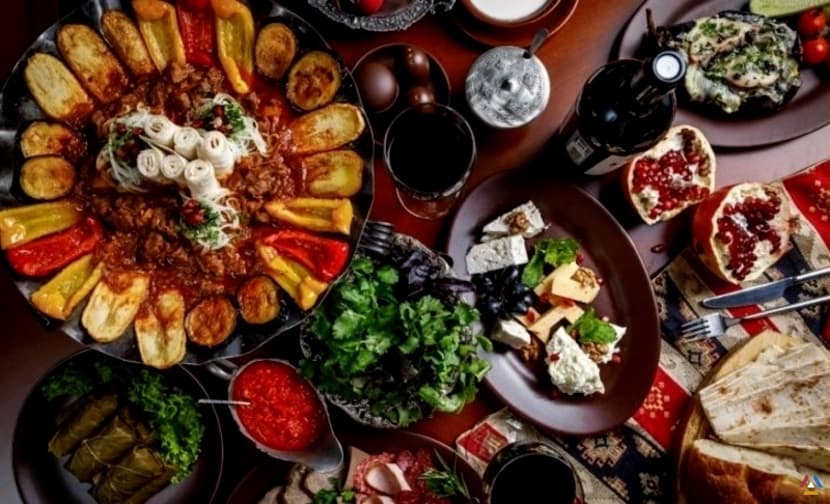 It is believed that the Armenian cuisine is more than three thousand years old, and it is rightfully considered to be the oldest in the Caucasus. Some Armenian national dishes became known in Europe through the Turks. So, Europeans still believe that dolma and tapak are Turkish dishes, which is wrong. It is noteworthy that the technology for preparing individual masterpieces of culinary art is not simple, and requires special devices, tools and even utensils. But most of the modern Armenian dishes, the recipes of which are freely available, can be prepared at home.

Features of the Armenian cuisine Traditionally, all residents of the Caucasus eat vegetables, fruits, meat, flour products, spices, beans, rice and other cereals. In Armenia, meat is preferred: lamb, beef, small and large poultry. As for the pig meat, it is not particularly respected, but some dishes of the Armenian cuisine are prepared using lean pork. Also, Armenians are very fond of fish, and for making fish dishes they use trout, which is processed using special technology, which allows it to maintain its delicate structure.

Healthy and tasty Armenian dishes are prepared using "local" products. For example, about 300 species of wild herbs are grown in Armenia, and all of them are used by culinary specialists. These are: thyme, cilantro, tarragon, basil, all types of mint and much more. In addition to fresh fruits, dried fruits are also used in cooking - dried apricots, raisins, prunes, and also walnuts. Fats are used to a minimum, which means that almost every Armenian dish can be safely attributed to the category of dietics. Basically, in national cuisine, butter (ghee or fresh) or sesame is used.

Names of the popular Armenian dishes

This list is endless. But some names of Armenian dishes are well known even to non-Armenians. Here are just a few of them:
1. Khash - beef soup, which is boiled for a very long time and served with herbs, salted vegetables and radish.
2. Mshosh - an appetizer, which in addition to lentils includes onions, dried apricots and walnuts.
3. Chkhrtma - the first dish, in which you can find pieces of fried chicken fillet.
4. Amich - a bird (turkey, chicken) stuffed with a mixture of boiled rice, almonds, dried apricots and raisins.
5. Kutap - trout stuffed with raisins and rice.
6. Skhtorats - vegetable snack.
7. Khorovats - consists of pieces of meat of solid size.
8. Bastiners - lamb stew with vegetables.
9. Bozbash - boiled lamb soup with peas and herbs.
10. Sujuh - spicy dry-cured sausage.
11. Tolma (dolma) - pieces of minced meat, consisting of lamb, rice and greens, wrapped in grape leaves.
12. Kololak - meatballs.

The Armenian cuisine, national dishes of Armenia differ from other cuisines by its originality. And it applies to snacks. Particularly outstanding, in all respects, is basturma - beef tenderloin, subjected to drying. According to legend, basturma is the invention of the warriors of Genghis Khan. When they set off on a long passage, they put a piece of beef under the saddle. The meat, crushed by the rider, and properly “steamed” with hot horse sweat, was deprived of moisture and took on a form suitable for eating. Other sources refer to this product as “Argentinean meat.”

Dry-cooked Armenian meat dishes are traditionally considered snacks and real delicacies. It’s just that basturma is now being prepared according to a completely different recipe, and the competition is made by sujukh - a dry-cured sausage that has a not very attractive appearance, but a great taste! Sujukh is not smoked - only dried. And it is customary to serve as an appetizer for national strong drinks. Also, it is worth remembreing about the lyula-kebab. This is not a very simple Armenian dish, which is popular among residents of coastal areas located near Lake Sevan. The composition of the dish includes cancer necks cooked on the grill with the addition of a large number of spices. Khash is a traditional Armenian dish, but it is far from the only "national soup". There is an opinion that it appeared back in the 11th century, and initially the khash was considered to be a “poor stew”, because it was prepared from beef legs and byproducts. This is a very useful, but laborious to prepare Armenian dish, which underwent several transformations, but retained its “essence”. The second most popular Armenian soup is bozbash, which is made from lamb meat and contains lamb peas and chestnuts. It is noteworthy that bozbash occupies an intermediate position between the first and second dishes, since it is very thick, because in addition to the main ingredients it contains a large amount of vegetables.

Chulumbur soup is a diet soup, the main ingredients of which are fried onions and rice. He seasoned with eggs whipped with milk. Anush apur is a sweet soup that must be eaten hot. It consists of dried apricots, onions fried in butter. The Armenian dish ''Spas'' - this is a sour-milk soup, which is prepared according to many recipes, but its permanent components are groats and ''matsun''. It can be eaten both in cold and in hot form, generously seasoning with red pepper. ''Sarnapur'', ''Kololak'', mushrooms soap are just some of the names of Armenian soups. The most popular Armenian national dish is Khorovac, which is better known as barbecue. There are several methods for its preparation, differing from each other in the way of marinating meat and technology. Classic barbecue made from lamb or pig. The meat is pickled in a mixture of lemon juice, cognac and wine. In addition to meat, pieces of pig tail are strung on each skewer. Khorovac is cooked exclusively by men. As for the side dish, vegetables, both fresh and stewed do that function. The technology for making dolma depends on what exactly is wrapped in grape leaves. After all, this is not always chopped meat, because vegetables can serve as the filling. Or the board - vegetables (tomatoes, eggplant, pepper) are filled with minced meat. Dolma from Ashtarak is a unique Armenian national dish in which apples and quinces serve as the basis for the filling. Armenian meat dishes: khashlama, kyufta, tzhvzhik are far from all variants of main dishes of national cuisine. By the way, Armenians are very fond of pilaf, which is cooked with dried apricots and prunes, and in some places with honey-pistachio sauce and pomegranate. Caucasian bread - thin lavash is the most popular type of baking. Dishes from Armenian lavash are simple and tasty, therefore this flour product is in high demand among representatives of different nationalities. Armenians make ''brtudj'' from lavash, which includes thin-leaf lavash, meat, greens, boiled eggs, green cheese. It is noteworthy that the composition of the national cuisine includes ''shaurma'', which is called Ghars Khorovats and is a type of barbecue. Matnakash is also Armenian bread, but it is baked only from yeast dough and exclusively from wheat flour.

Armenians also have a kind of pizza – ''lahmajo'', the basis of which is a thin bread. On top of it lamb stuffing, greens and vegetables are laid. The list of Armenian flour dishes is much wider than is commonly believed. And real gourmets really like bread stuffed with herbs and containing a large number of spices. And they are called ''jingyalov hac''.

It is enough to list the names here, because many Armenian sweet dishes are well known to representatives of other nationalities. For example, the bakhlava. Less well-known, but no less tasty delicacy is sharots (sweet sujukh, Armenian churchkhela), which is prepared from walnuts and fruit syrup. Dried peaches with nut filling – ''alani'' are especially popular among those who like to watch TV series. It is worth noting that indulging in two very pleasant activities - watching Armenian TV series, TV shows and eating national sweets, can be done at the same time!
0 12:52 12-04-2020